More than 1.5 billion Internet of Things (IoT) devices are expected to be in use in 2022. While this creates many business opportunities for companies across different domains, it also presents some connectivity and other challenges.

A basic understanding of the network that will support your devices and the implications of making certain decisions is crucial to effectively deploying an IoT solution. This article explains one specific aspect of connectivity – licensed versus unlicensed spectrum network options – and explores the impact that each can have on the success of your IOT project.

Most IoT systems link sensor networks using radio waves that transmit data from one place to another. Radio waves, which are mainly used in communication technology, are a type of electromagnetic (EM) radiation (a form of energy); they make up a small part of the so-called electromagnetic spectrum, which is divided into regions called frequency bands.

Radio waves are measured by frequency or wavelength – the distance between two identical points in a waveform signal. The frequency is the number of waves that pass through a given point per second. The best place for modern data transmission is between 300 megahertz (MHz) to 6 gigahertz (GHz).

The electromagnetic spectrum is a limited resource – there are only a certain number of radio frequencies. But too much activity on certain radio frequency bands will create interference to the point where nothing is noticeable. Like other countries, the US has instructed a government agency, the Federal Communications Commission (FCC), to allocate spectrum for efficient use.

The FCC licenses radio frequency spectrum to certain users, such as television and radio broadcasters. Individual companies pay a license fee for the exclusive right to transmit on an assigned frequency in a specific geographic area. In return, these users can be confident that nothing will interfere with their transfer.

Alternatively, organizations can still use radio waves to transmit messages without FCC approval, but they must transmit on portions of the spectrum intended for unlicensed users. The amount of spectrum available for public and unlicensed use is very small – only a few bands. Both the size of the area and the lack of exclusivity mean that there is a greater likelihood of interference from other nearby users. (This is like the “wild west” of radio communications.)

Nowadays, except for cellular devices, almost all IoT devices operate on the unlicensed spectrum.

In many IoT applications, four properties are particularly important:

The so-called Low Power Wide Area Networks (LPWAN) fulfil these criteria very well. There are now a whole host of different LPWAN standards, some of which differ greatly from one another.

Now let’s see how they compare across different parameters.

Sigfox currently provides a comprehensive broadcast and reception infrastructure in around 60 countries. Coverage varies, as some countries such as France or Denmark are almost completely covered, while in the USA, it is still mainly limited to the metropolitan areas. Germany currently has coverage of around 85%. In addition, Sigfox covers almost all major airports worldwide, creating an advantage for logistics and tourism projects.

The French company’s technology limits the sensor device to 140 data transmissions per day and 12 bytes per message. This solution enables self-sufficient transmitters that can be used for several years on one battery. To do this, Sigfox uses an open standard that operates on sub-GHz frequency bands and can be used by any radio provider. The data is then sent to the Sigfox cloud, where the customer can collect it via an API. This makes Sigfox particularly suitable for logistics or smart city projects.

As with Sigfox, the customer can tap into existing infrastructure and maintain it cost-effectively. In exchange, the data is temporarily out of the customer’s control. LTE-M is part of Release 13 of the 3GPP standard designed to reduce power consumption, lower equipment costs and enable deeper coverage. This is to reach challenging locations, such as deep inside buildings. This standard will improve NB-IoT in terms of bandwidth. In addition, this solution offers probably the highest level of security of the LPWAN technologies presented here.

Above all, the outlook for 5G promises interesting areas of application for NB-IoT in the IoT world, such as as a key technology for self-driving cars, thanks to its high range and data volume potential. However, the big question is when 5G will become widespread and where NB-IoT will then be positioned in terms of price. 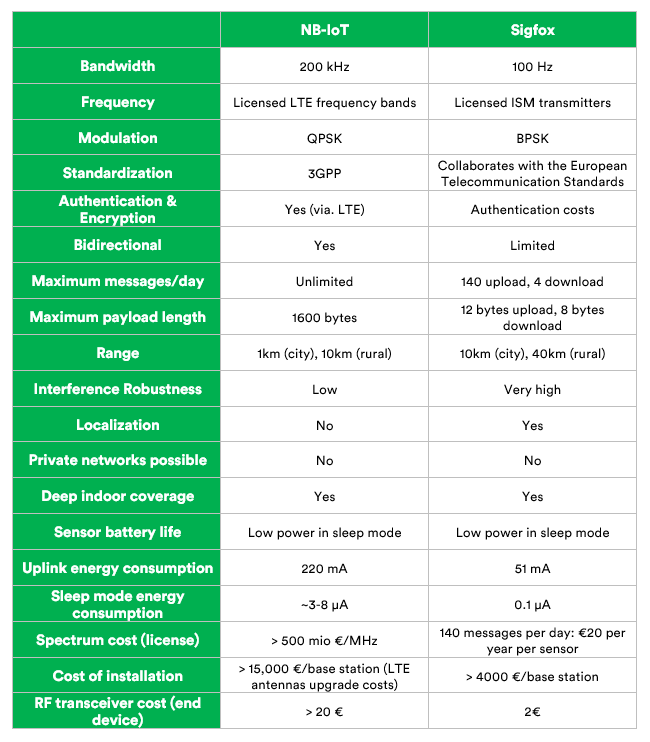 The main advantage of Sigfox and LoRa is that they use free frequency bands for which no license fees are charged. SIM cards and contracts with mobile network providers are also not required, and roaming charges do not apply. The costs for operation are therefore lower overall. However, Sigfox and LoRa have other significant differences to NB-IoT and LTE-M, which may be beneficial or detrimental depending on your use case:

Sigfox, in particular, but also LoRa, are designed for networking very simple devices with each other. Therefore, they are often referred to as 0G networks Sigfox and LoRa require very little energy. However: for some IoT use cases, the data volumes may be too small, the transmission speed too slow, and the latency too high.

Both SigFox and LoRa have already been on the market for several years and are therefore field-proven. Nevertheless, the infrastructure at SigFox still has shortcomings. With LoRa, the user must take care of the network himself. However, companies in some countries are offering nationwide coverage with LoRaWAN networks. Setting up your own network can have its advantages. You can use it to cover an area that mobile network providers do not cover. And: Within your own delimited network, the data remains in your own hands.

SigFox is a proprietary technology developed by a French company of the same name and launched in 2009. A non-profit organization called the LoRa Alliance is behind LoRa. But the technology is just as patented and proprietary because it only works with chips from the Chinese manufacturer Semtech. The users are, therefore, dependent on the two companies as suppliers. If they want to switch to a different transmission technology, they also have to change their hardware.